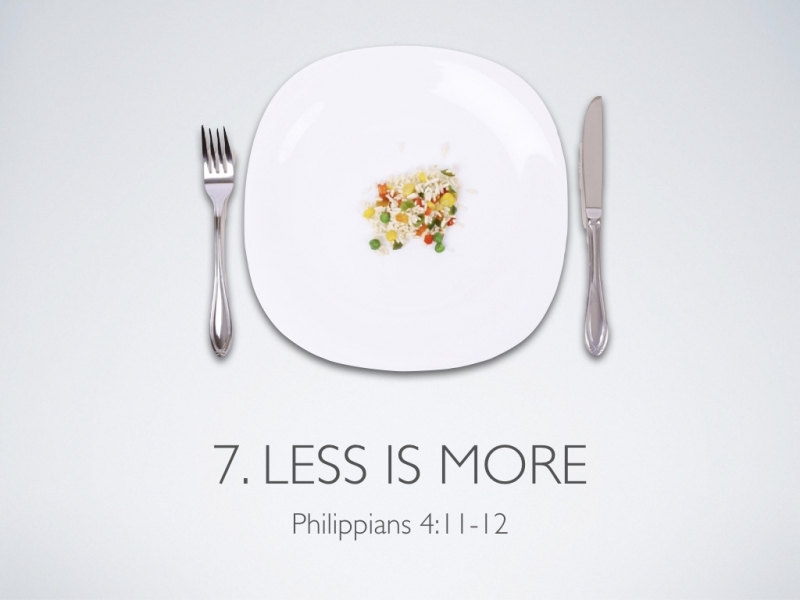 When I was on my weight loss journey we were reminded that “Less is more”. The idea was that we should eat only until we are satisfied and not until we are full. One of the instructors told me that she would get her entree at her favorite restaurant she would often have her bring a take home tray. She would then divide her food into two. She was satisfied with half an entree and she could enjoy it again for supper.

We live in a country of excess. We eat too much. We drink too much. We spend more money on entertainment that we should. We own too much stuff. And we throw away more garbage than any other country in the world.

The other day I made a run with the garbage to the “convenience center” to throw out the garbage. I watched several people throw away things that looked like they might still be useful to someone. As I watched someone throw away a computer I heard someone ask, “does that still work.” The man said that it did but that it was outdated and he got a new one. The attendant at the dump later said to me, “We have too much when we can throw all this away.”

I believe that is true. Living in a land of plenty is a blessing. But having too much can be as stressful and worrisome as not having enough. People who have too much have to worry about keeping it and maintaining it, paying taxes, and other stuff.

Sometimes we fall in the habit of not being content with what we have. We want even more: A better job, a bigger office, a larger paycheck, a nicer house, a newer car, the latest gadget, a faster computer, and more tv channels that you could watch in a lifetime. All this adds stress to our lives.

There was a fellow who bought an expensive car that he always wanted. But after having it for only a year he decided to sell it. He explained that he spent more time cleaning and maintaining it than driving it. When he took it out he worried about getting in an accident or dinging the paint job. When he went somewhere he was the one that parked in two parking spaces so no one would bang their doors or shopping carts against it. It was too much stress so he got rid of it.

We have a basement full of stuff. When I first moved here my grandson could ride his “zip board” around down there. But now you can barely walk through it. You can’t imagine the frustration that has led too. So we are going to simplify, donate, and sell some junk that we don’t need.

Jesus told us not to worry about stuff and things (Mt 6:19-34). Things of the world will all rust, break down, become outdated, fade away, get stolen, and become meaningless. We are supposed to trust God to supply what we need (not what we want). We are supposed to store our treasures in heaven… invest in spiritual, not physical things.

I am not tell you to get rid of all your junk, stuff, and things. I’m just stating that if you want to remove or reduce your stress you need to be content and trust God more. May God bless you with contentment and a thirst for spiritual treasure.

PRAYER THOUGHT: Dear God; You are my provider. I trust in you. I seek the spiritual treasures of your kingdom. Help me to be less materialistic and content with what you have given me. Thank you for the saving grace you have given me in Jesus and the hope of eternal life. In Jesus’ name, AMEN!