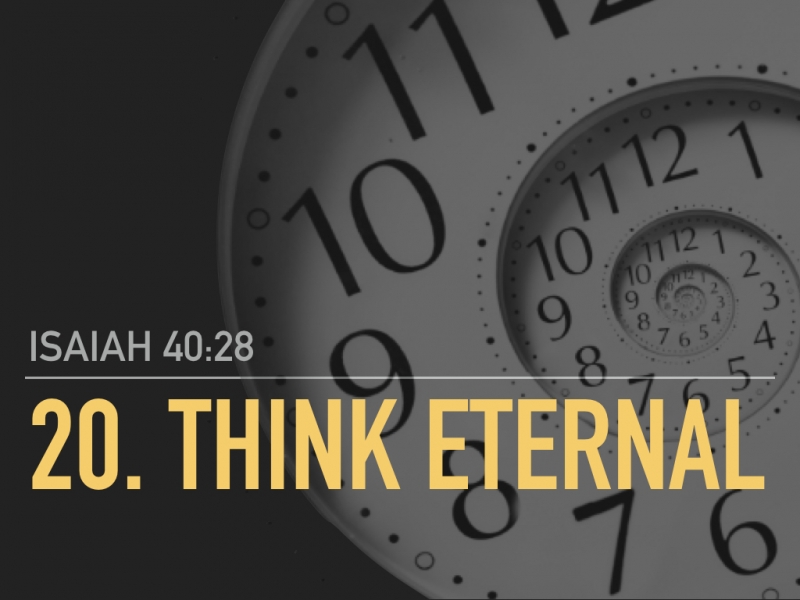 Have you not heard?

The Lord is the everlasting God,

the Creator of the ends of the earth.

He will not grow tired or weary,

and his understanding no one can fathom.

It’s hard to grasp the eternal when you live on the physical plain. We were created in a box that is ruled by the laws of time, space, and physics. We think linear because we have experience a 3 dimensional world that progresses in a sequential manner. It’s really hard to think outside that box when you start talking about God.

God is omnipresent. We are confined to a physical realm and body but He is not limited by time or space. We are limited in our scope and reach but He can be as big or as little as he needs to be. We get exasperated and say, “I cannot be in two places at one time,” but our God can. We age at a given rate but our God is “the Alpha and Omega,” “the Beginning and the End” and he never ages nor ever changes.

God is omniscient. He is all-knowing. His knowledge and wisdom are far beyond us. We see the small picture but he sees it all and knows it all. His power and intellect are so vast that he could create all things into existence with just his word… the vastness of space, the complexity of biology, the intricate calculations of mathematics, the physics and science needed to put creation together all reduced down to the simple words, “Let there be…”!

So how could I possibly expect anyone to “Think Eternal”? Basically I’m saying that we sometimes have to look outside of this physical box we live in so that we can have a better grasp of God’s word. By just being aware that the eternal, powerful, and spiritual nature of God revealed in His word helps us to have a better grasp on the scriptures.

Right now I am preaching a series on the second coming of Christ. I am preaching and studying in Matthew 24 and 25. There are a lot of people who take it that the whole chapter is about the second coming and most of it is. But when you are aware that the disciples really asked three questions than you see that it can change the meaning. The disciples asked when the temple was going to be destroyed, when was he coming into his kingdom, and when is the end of the age. Jesus answers all their questions but not really in sequential order. His main theme of his reply is for us to “be ready”. But some people have tried over the ages to use the clues in the Bible, numerology, and signs to predict the date of the second coming. This is foolishness as Jesus said that only the father in heaven knows he is coming. But he did tell us the sign of Noah… people will be living and doing things as usual and many will be taken unaware just as when the flood came. Be ready…don’t be caught in the flood.

We need to realize that prophecy in the Bible is often more FORTH-Telling than FORE-Telling. Often the word prophesy can just as easily be translated as preaching or sharing God’s word. A message from God can reveal future events but it is not always a foretelling of the future.

A prophesy is a message to a given people at a given time in a given situation that is either meant to give hope or to call the audience to repentance. A timeless God is revealing a message to people who are limited by our concept of time. He did not mean for us to dissect the prophetic word to come up with new doctrines, theories, and timelines of future events.

Just be aware when you are reading the Bible that God is eternal and spiritual. Be aware of our limitations as physical, created beings. God loves you and wants you to understand his word. He wants to have a relationship with him. And it is this treasure that we carry in clay jars.

May God bless you as you think outside the box and try to connect with the infinite mind of God. May you be filled with awe and wonder as you read this magnificent word.

PRAYER THOUGHT: Dear Lord Almighty, Maker of heaven and earth. I am fearfully and wonderfully made by your loving hands. I have been created with a purpose and my life has meaning because that is how you made me. Your thoughts are not my thoughts for who can comprehend the mind of God? Yet you have given me your word and your spirit. You teach me day by day to understand a little more or the eternal. I set my mind and hope on being with you in the eternal one day. Thank you for Jesus in whose name I pray. AMEN!