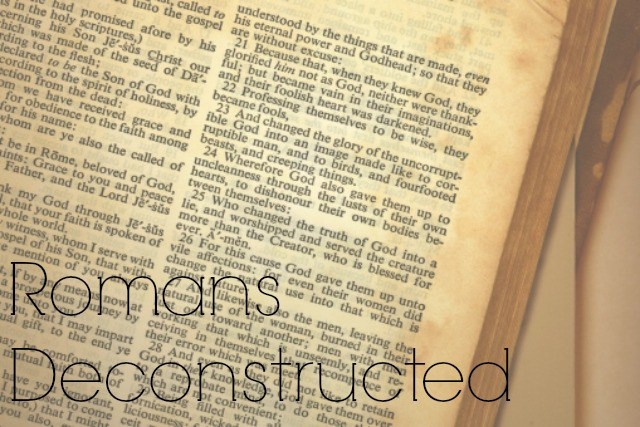 Therefore, I urge you, brothers and sisters, in view of God's mercy, to offer your bodies as a living sacrifice, holy and pleasing to God--this is your true and proper worship (Ro 12:1 NIV)

I beseech you therefore, brethren, by the mercies of God, that ye present your bodies a living sacrifice, holy, acceptable unto God, which is your reasonable service. (Ro 12:1 KJV)

Perhaps this is the most pivotal verse in Romans. It is the transition from background into application. And when it comes to studying the word I am really into asking the question, “How does this apply to my life.” So let’s take a look at this one little verse and see the beautiful picture it paints and application for our life today.

THEREFORE: Whenever you see the word “Therefore” in a verse you must ask the question, “What is it there for?” To find out the answer we look at two things: 1. The context of the writing or what has the writer been trying to convey. 2. The content of the statement itself.

Paul has been addressing the churches at Rome. The church was started by Jews. As they shared the good news message of Jesus Christ, Gentiles accepted Jesus and became a part of the church. Somewhere around 49 AD, Claudius expelled the Jews from the city of Rome. The church was left for the Gentiles to carry on and they did. In 54 AD, Claudius died. Afterwards, the Jews were gradually allowed back in Rome. But this caused some tension in the church as the Jewish Christians came back.

Paul writes the book of Romans sometime around 56 AD. He sends his letter to Rome with Phoebe who is a deaconess and helper to Paul.

In the verse, Paul says “in view of God’s mercy”. God has saved both Jew and Gentile. God has done this for a purpose…so then, let us get on to it!

URGE: Looking at the various translations you can see different words used for this idea: beg, beseech, encourage, and admonish. The Greek word Paul uses is parakaleó which is used as a strong exhortation with deep emotion. Paul is basically saying that because of this common bond of God’s grace I implore you to do as I say.

BROTHERS AND SISTERS: Too many people get caught up in this gender inclusive issue here. Paul uses the Greek word adelphos which literally means brethren or brothers. But the word is a compound word from alpha which is a prefix indicating “of the same” and delphus meaning “womb.” The idea is a shared origin or commonality. Paul uses it in the larger sense of the Christian brotherhood.

Today we call our fellow Christians brothers and sisters. We use this rather superficially. But Paul is sharing a deeper connection. It is the common bond of Jesus Christ that holds us all together. It does not matter if you are Jew or Gentile, male or female, slave or free because we are all of the family of God. This is a powerful thought to keep in mind the next time you hold a grudge against a fellow Christian.

In this case, the translation of adelphos as brothers and sisters does fit perfectly in spite of the fact that it is not a literal translation.

IN VIEW OF GOD’S MERCY: Paul is directing the attention where it needs to be. If it weren’t for God’s mercy we would be lost. Other translations may use grace or compassion here. The idea is that God was moved to action. He loves man so much (Jn 3:16) that he could not idly stand by and watch us perish. Like a mother who cares for her child’s safety puts herself in danger so the child will be safe. It is beyond logic. Logically, we are sinners who deserve to die. But God’s mercy goes beyond the logic of man. He moved! His Son died for our sins. Paul urges us by this common cord of the mercy of God to do as he says. This says so much about God’s unconditional love.

PRESENT: Another word pops off the page to me. Paristémi is the Greek word that Paul uses to paint this picture of an Old Testament sacrifice. The word literally means to stand close beside. The idea is as someone brings there sacrifice or offering to the tabernacle. They would stand beside the animal or offering.

Almost as important as the offering is the attitude that we have with giving the offering. Jesus tells us in Matthew 5:21-25, “…if you are offering your gift at the altar and there remember that your brother or sister has something against you, leave your gift there in front of the altar. First go and be reconciled to them; then come and offer your gift.”

When we present our lives as a living sacrifice it is to be a given freely without resentment, without guilt, and with a proper attitude.

LIVING SACRIFICE: This sacrifice of ours is to be living. Paul is basically saying that everything we do, everything we own, everything we say, everything we think, is to be a sacrifice for God. Every breath that we breathe is an experience of the gift of life, abundant life, and eternal life that God has given to us. We are to give it back to him. Jesus gave his life for us so that we could present our life back to God.

The blood sacrifices of the Old Testament were sacred. It was to be done in a prescribed manner and sacrificial animal was to be perfect. Every part of the animal was presented to God. There is even a Jewish writing that talks about the cries of the sacrificed animal were a song to God.

Another word for sacrifice is offering. What we bring to God is what we offer to him. We should never offer him anything that does not cost us (2 Samuel 24:24). It also should not be something cheap or given half-heartedly. God gave his Son. Jesus did not give a partial sacrifice… he gave his all and suffered for us. What else can we offer God than our whole life without reservation or excuse?

Ananias and Sapphira laid their offering at the feet of Peter (Acts 5). It wasn’t that the gift wasn’t of value. But Ananias and Sapphira did not give all. They held back a portion for themselves and lied about it. The result is that both dropped dead.

ACCEPTABLE: It is not only the gift that is important. The priest presenting the offering had a prescribed method that God had laid out in the book of Leviticus. Both the ritual and the animal had to be according to the law. (Leviticus 1:3, 9). If he used the proper method with the right attitude of service the gift would be accepted. This was true of every offering and sacrifice.

When Aaron’s sons, Nadab and Abihu (Leviticus 10) offered “strange fire” on the altar of incense they were consumed by fire from the Lord. Aaron was so devastated that he wanted to be removed from service as the High Priest.

Our living sacrifice must be presented in a way to God that is both “holy and acceptable”.

Latreia is a word that refers to "render sacred service" as a priest or Levi would perform in the temple or tabernacle. The word occurs five times in the NT (Jn 16:2; Ro 9:4, 12:1; Heb 9:1,6). Paul uses the idea to show us the solemnness of the sacred service that we perform as we present our bodies as a living sacrafice.

The application for us as Christians is very clear. Often times in the church we spend more time arguing and fussing with each other over means and methods and petty stuff. We often focus on our differences rather than what we have in common. We are brothers and sisters in Christ with a common cord of the love, mercy, and grace of God. We all have faith in Jesus. So let’s move forward together and get with it.

The Roman church is not unlike so many out there today. When we focus on our difference and all paddle in different directions we go in circles and accomplish nothing. But when we put aside our differences and present our bodies as a living sacrifice to God we can get busy working together and we can accomplish much in God’s kingdom.

PRAYER THOUGHT: Dear God, I want to thank you for your sweet mercy and grace. I thank you for Jesus who is the sacrifice for my sins. Lord, I want to be a living sacrifice. Help me to present my whole being to you with the right attitude. I ask also that you help me to work together with my brothers and sisters in Christ so that we can accomplish your work and your will. I pray this in the name of Jesus Christ. AMEN.